The Swiss Water Decaffeination process is a chemical-free, environmentally-friendly process that maintains the sweet taste of Honduras beans.

The Swiss Water Decaffeination process is a chemical-free, environmentally-friendly process that maintains the sweet taste of Honduras beans.

Cooperativa Cafetalera Capucas Limitada (Cocafcal) or Capucas as they are better known, is situated on and around the Celaque mountain, which is the highest peak in Honduras. Celaque means ‘box of water’ in the local Lenca language, and the mountain is the source for many rivers and streams.
Capucas was founded in 1999 by Jose Omar Rodriguez and takes its name from the local town of Las Capucas. In 2004 Omar was chosen to become the general manager – a role he continues today.
The coffee is harvested at its optimum ripeness and handed in at the cooperative. It is then washed, dried in a solar dryer, and stored in parchment before being trucked to the port of Puerto Cortés. Capucas was the first in the country to build a facility to dry microlots in a large scale with solar dryers.
Coffee trees are pruned to a low height so it is easier to pick the cherries. However, if its cut too short too soon they fall over. Therefore, the pruning is staggered: in the first year they prune to 180cm, 170cm in the second year, 160cm third year, and 150cm in the fourth year; then when the tree is cut down to the bottom, the trunk is strong enough to support the new growth.
The cooperative has many initiatives to improve the lives of workers and the local community, for example; they pay for a GP to treat workers for free in their health centre which is in the centre of Las Capucas. In 2016 Capucas partnered with the National Autonomous University of Honduras (UNAH) to provide a university education. The virtual classroom was opened in the community of Capucas in a rural part of San Pedro Copan. UNAH provides the technical support, teachers, and subject matter for the students. They also have a football academy which is free to join and a virtual library for members, children, and partners of Capucas Cooperative.
To prepare the beans for caffeine removal, they are cleaned and hydrated with pure, local water. The beans are then introduced to an internally developed Green Coffee Extract (GCE), and caffeine removal begins. Caffeine ventures out on its own, away from the coffee beans into the GCE until the ratio of soluble compounds in the GCE to the compounds in the coffee reach the point of equilibrium. Caffeine and GCE flow continuously through carbon filters until all the caffeine is trapped and separated from the GCE, which is refreshed so that it can be used again and again to remove more caffeine. The process is monitored for around 10 hours and caffeine levels checked as well as time, and gauge temperature controls until the coffee is 99.9% caffeine-free.

There are no reviews yet.

Only logged in customers who have purchased this product may leave a review. 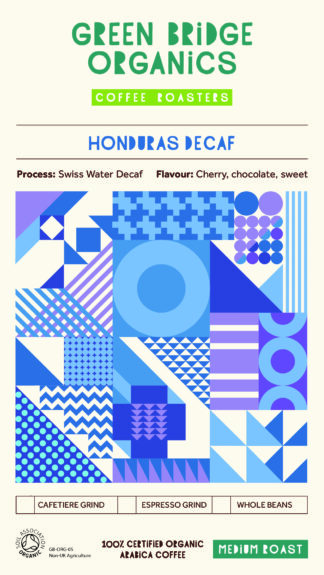